From using custom-made, biodegradable fabrics and “living” clothes that photosynthesize to polyester created from planet-warming carbon dioxide, European start-ups are on a quest to transform one of the world’s most polluting industries: fashion. 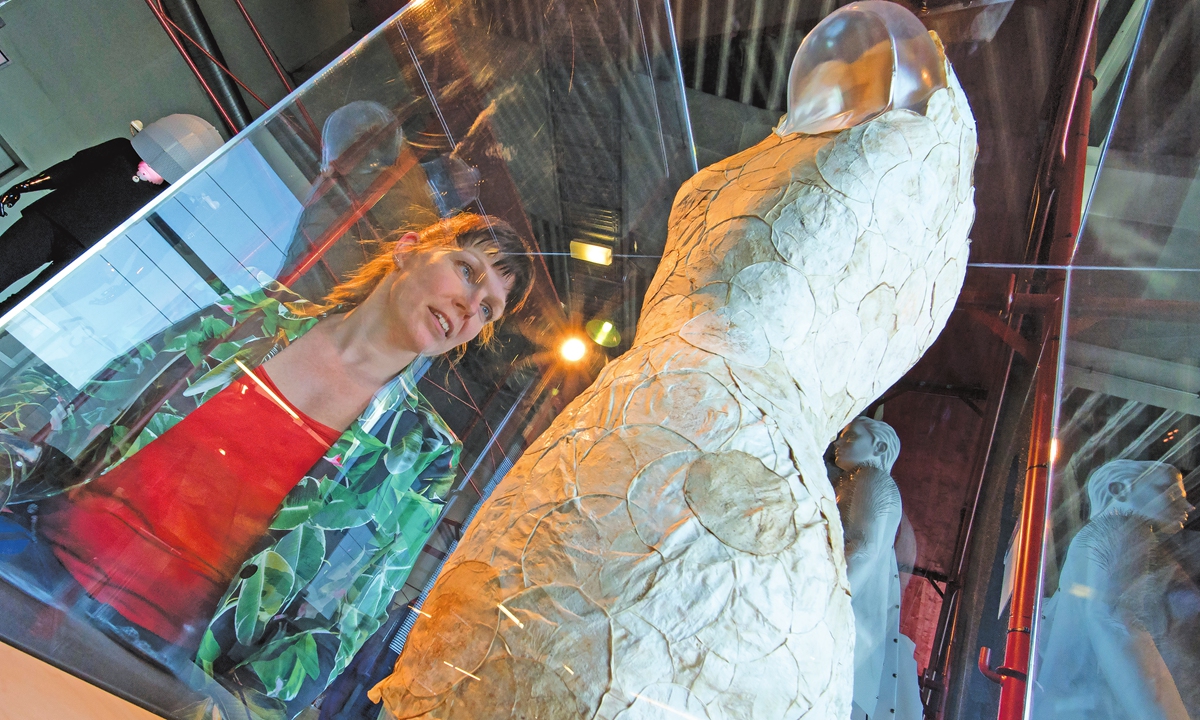 Dutch artist Aniela Hoitink looks at her creation, a dress made out of mushrooms, during the festival for Arts, Technology and Society ARS Electronica 2016 on September 8, 2016 in Linz, Austria. Photo: AFP

The business is responsible for 10 percent of global carbon emissions, more than all international flights and maritime shipping combined during the pre-pandemic period, said the United Nations Environment Programme (UNEP).

A sizable chunk of fashion’s emissions – up to 40 percent – come from the manufacture of polyester, the most-used fabric, said Benoit Illy, cofounder and CEO of French start-up Fairbrics.

“If we can bring emissions from polyester to zero or negative value, we can significantly reduce industry emissions,” he said in a telephone interview.

Illy and cofounder Tawfiq Nasr Allah, both chemists, aim to replace existing polyester-producing processes, which use fossil fuels, with their new technology.

It uses electricity and a catalyst to turn carbon dioxide – emitted when fossil fuels are burned and a major driver of climate change – into synthetic fibers, Illy said.

In some respects, the process is similar to trees capturing carbon dioxide from the atmosphere and using sunlight and natural enzymes to produce fiber, he said.

By the beginning of 2021, Fairbrics – its name refers to a “fairer” way of producing fabrics – expects to be able to produce a kilogram of polyester yarn a day, he said. The firm’s aim is to take the effort to industrial scale in early 2024.

The room for scale-up is clear: The fashion industry currently consumes more than 60 million tons of polyester a year, Illy said.

In October, H&M, the world’s second-biggest fashion retailer, said it would showcase a recycling machine that could turn old jumpers into new sweaters or scarves on the spot at a store in Stockholm.

Every second, a garbage truck worth of textiles is landfilled or burnt, a costly waste of resources, according to a foundation set up by retired British sailing star Ellen MacArthur.

If Aniela Hoitink, founder of Dutch company MycoTEX, has her way, however, people’s wardrobes would adopt a more biological lifecycle, with garments grown and later decomposed in the way trees grow and drop leaves.

She is working with mycelium – the feeding threads of mushrooms – to produce custom-fitted, on demand clothing that reduces waste and cuts chemical use. At the end of its life – a minimum of two years – the garments would be biodegradable.

The production cycle – growing mycelium, harvesting it, putting it into a 3D mould, drying it and then finishing the final product – currently takes about two to three weeks, said Hoitink, who has worked in fashion for more than a decade.

The 3D modeling also allows for seamless garments that are comfortable and perfectly fitted, Hoitink said.

“When you have a customized garment, it’s [a] luxury. But we believe that with this production system we can do that on a mass scale,” she said. In particular, the material could make it easy to shape garments for different body types and markets, she added.

London-based Post Carbon Lab wants to take emissions-cutting even further, making sure fashion and design have a positive effect on the climate by turning fabrics into carbon-absorbing surfaces.

Designers and researchers Dian-Jen Lin and Hannes Hulstaert do this using photosynthetic coating technology which involves introducing microorganisms, such as algae, to the fabric.

Having a “living” garment does require a different set of care, Lin said, and users need to give it some access to moisture – such as an open window on a rainy day – as well as ventilation and light.

Fairbrics, MycoTEX and Post Carbon Lab are three of the 10 finalists in the 2020 European Social Innovation Competition, which is focused on fashion and run by the European Commission. Other finalists were chosen from more than 760 applicants.

The competition, now in its eighth year, is looking for practical solutions to key environmental and social issues and has focused in past years on issues such as cutting plastic waste and better integrating refugees, said Sonya Gospodinova, a European Union spokeswoman.

Three winners are expected to be announced on November 26, with each receiving 50,000 euros ($59,000) in prize money, the organizers said.

“What is the ecological role of fashion?” asked Post Carbon Lab’s Lin.

“If we don’t have the environment, where essentially we all live, there’s nothing. There’s no society, no happy communities to build on. And… the clock is ticking.”
Newspaper headline: Ecological apparel