The book comes as the nation and the world grapple with a pandemic and racial and cultural divisions.

“Growing up, I didn’t have these types of images,” said Kahran Bethencourt, a native of South Carolina. “I’m putting out there what I would have wanted my younger self to be able to see. I want young people to see themselves and see that the sky’s the limit. They can look and see a 13-year-old pilot or a 3-year-old who can read. I want them to feel powerful and limitless.”

The photographs in the 243-page book are divided into the past, the present and the future with the young people featured not only showcasing their beauty and individuality but what makes them special.

The Bethencourts took about 10 months to shoot the book, and their travels took them across the United States and to London, Kenya and South Africa.

Some of the young people are interested in the arts, aerospace and teaching.

In the future, there’s 10-year-old Amoy Antunet of Cobb County, who wants to be a pediatric neurosurgeon. In 2018, young Amoy spoke at a Neuroscience Roadmap Scholars Program conference at the University of Alabama at Birmingham.

Photo of 10-year-old Amoy Antunet of of Cobb County, who wants to be a pediatric neurosurgeon. Courtesy of CreativeSoul Photography

There’s Erica Armah Bra-Bulu Tandoh, also known as DJ Switch, from Ghana. Erica began deejaying when she was 9 and has been featured on BBC News Africa and in 2018 became the youngest person to win Ghana’s annual DJ award.

The only adult featured is Richard Appiah Akoto, who teaches computer science in Ghana. He was photographed with some of his students.

With few computers around, Akoto drew the computer or application on the blackboard and taught his students to launch Microsoft Word. His solution went viral and the school received two new computer labs.

Back in Georgia, from Gwinnett County is Nailah Stallworth, who knew 100 words by the time she was 15 months old. A video of her reading went viral on social media and got millions of views.

Today, Nailah is “being a toddler” in kindergarten and “having a blast with it,” said her mother, Malica Stallworth. “When she’s reading, she’s reading for fun.”

Trinity Simone, dubbed “The Freedom Fighter,” is also profiled. Simone, a 17-year-old home-schooled senior, is CEO and founder of Black Vibe Tribe, an apparel and home goods brand, and also created a nonprofit, The Youth Will Be All Write. The nonprofit donates composition notebooks to youth detention centers in hopes of providing the youths an outlet to create through the power of the written word.

“As with all of the other beautiful

New York City originated fashion house, Pink Maison, looks to further solidify itself as a household name as it opens a showroom in Downtown Atlanta. The luxury couture shop is hosting an exclusive cocktail mixer on Saturday, October 24, 2020 aiming to introduce its take on New York luxe fashion to the Atlanta market. This event will consist of light bites and wine during a cocktail hour followed by a fashion presentation, style discussion and debuting of the Pink Maison Self-Care Box. 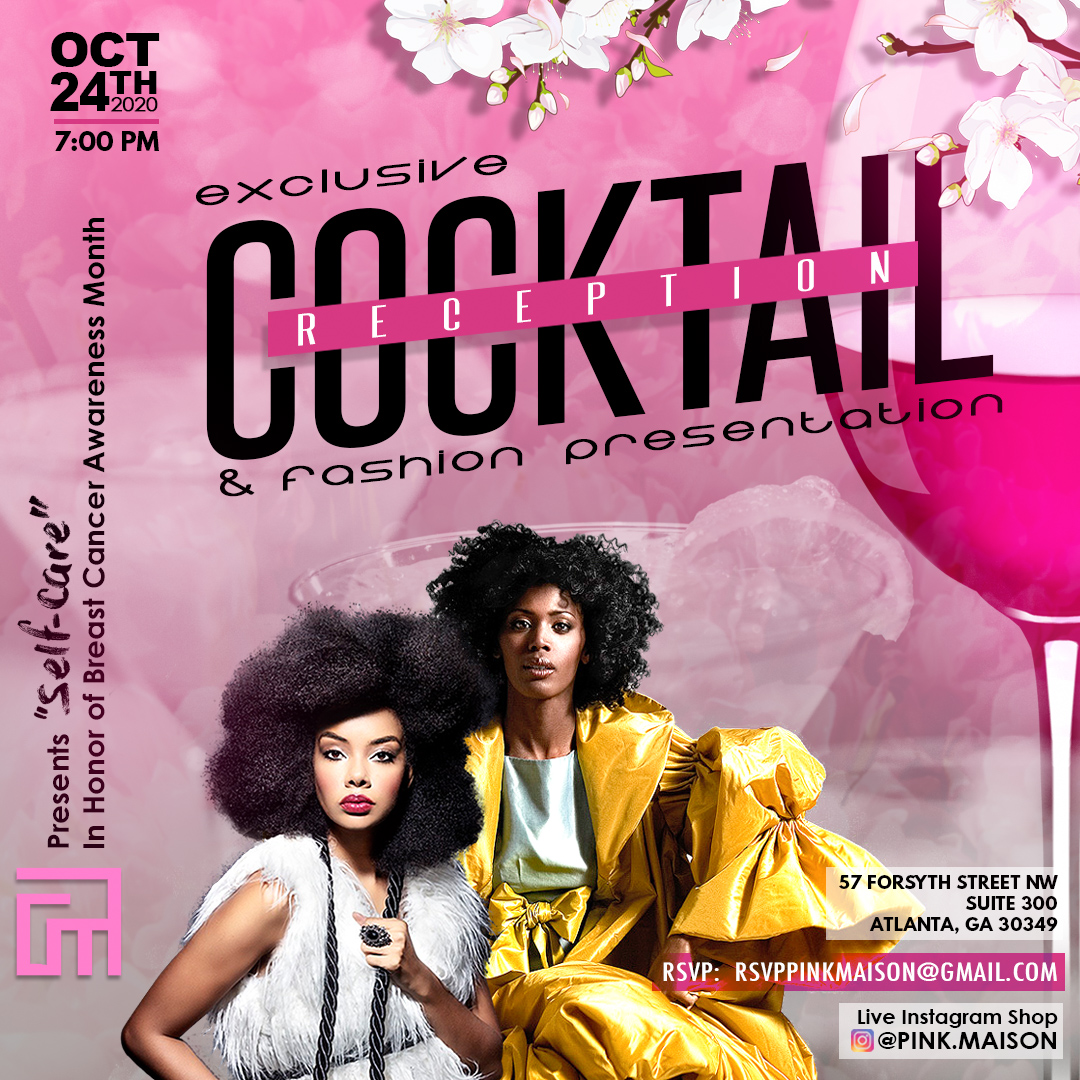 Cynthia Bailey’s wedding wasn’t filmed for Real Housewives of Atlanta after all, Bravo worried about COVID-19

Real Housewives of Atlanta star Cynthia Bailey’s wedding wasn’t filmed by Bravo due to COVID-19 and the weather, according to TMZ.

No camera crew from Bravo was present, which led to speculation that Bravo refused to risk filming Cynthia’s wedding over coronavirus concerns. The wedding was originally scheduled to be outside, with Bravo filming the event for the reality show.

As it turned out, the weather forecast changed due to Hurricane Delta and the wedding was moved indoors, forcing Bravo to cancel plans to film the event. With more than 200 guests scheduled to attend, the show thought it was too risky for the camera crew to film the celebration indoors.

Bravo may have refused to film the wedding, but Cynthia hired her own crew to capture her nuptials for the RHOA, so the wedding will be on the show. The couple wed at the Governors Towne Club in front of 250 guests.

It seems that Mike and Cynthia took precautions to keep wedding guests safe from the coronavirus. Masks could be removed while eating (and apparently for pictures), but otherwise were required.

“Everyone has to wash their hands before coming inside and we will have hand sanitizing stations throughout the venue,” said Cynthia, adding that everyone must wear a mask at all times. “It’s not optional,” she concluded.

Guests were also required to confirm they had a negative COVID test from within five days of the nuptials. Guests were asked to wash their hands in the entryway and were temperature-checked at the door.

While Real Housewives of Atlanta co-star NeNe Leakes was noticeably absent from Cynthia’s wedding, co-stars Kandi Burruss and Kenya Moore were in attendance and served as bridesmaids.

Former castmate Eva Marcille also served as a bridesmaid. Eva announced she was leaving RHOA on The Rickey Smiley Show in June.

Cynthia is currently filming the next season of RHOA, and the couple plans to maintain residences in Los Angeles, where Mike works, and Atlanta, where Cynthia lives.

The Real Housewives of Atlanta is currently on hiatus at Bravo.

After severe MLB penalties, Atlanta has become a model franchise

Just three years ago, after yet another losing season, Atlanta was in a state of scandal-induced, MLB-enforced chaos.

Their general manager, John Coppolella, resigned amid the league’s investigation into the team’s conduct on the international amateur player market. Upon completing the probe, MLB gave Coppolella — then just 38 years old — a lifetime ban, suspended one of his top lieutenants for a year, declared 13 prospects free agents and placed severe, suffocating restrictions on Atlanta’s international spending in the coming years.

The international market for young players, especially in Latin America, was and is considered baseball’s wild west. Corruption is common. MLB wanted to make an example of Atlanta and its former GM.

And then a funny thing happened: Under the pressure of penalties, Atlanta became a diamond. Led by president of baseball operations Alex Anthopoulos, it has turned into one of the sport’s model franchises and has found nothing but success, including taking a 3-2 series lead into Saturday’s Game 6 of the NLCS against the Dodgers.

Atlanta’s success starts at the top with Anthopoulos, who wasn’t the kind of Ivy League-educated, analytics-groomed baseball operations boss so many teams seek these days. He had a scouting background, had already run a team — the Blue Jays from 2009-15, getting the club to the ALCS in his last season — and had been working for the Dodgers. He recently characterized that experience as “like going to grad school.”

“Alex is a man of integrity and he will operate in a way that will make all of our fans proud,” Atlanta team chairman Terry McGuirk said upon hiring Anthopoulos, adding that the preceding months were “the toughest in the storied history” of the franchise.

In the context of Coppolella and the scandal, the juxtaposition McGuirk sought was obvious. But beyond morals and virtues, Anthopoulos has given fans another reason to be proud: The team is a winner.

Three consecutive NL East titles. A .578 winning percentage — good for more than 93 wins in a 162-game season. A player development machine, started during the Coppolella era, churning out significant contributors every year. And a bulked-up analytics department that aids in most every aspect of the operation.

Atlanta seems not to be going anywhere, either. That could mean trouble for the rest of the division — including Steve Cohen’s Mets and the rebuilding Marlins who surprisingly made it to the playoffs this year — and league.

Freddie Freeman, the likeable face of the franchise, is Atlanta’s longest-tenured player. Ronald Acuna Jr. and Ozzie Albies are young, electric, homegrown stars who already have signed long-term, team-friendly deals. Then there are the young starters, Cy Young candidate Max Fried and Ian Anderson and Kyle Wright — not to mention Mike Soroka, who missed most of this season due to an Achillies injury but in 2019 was one of the best pitchers not named Jacob deGrom and best rookies