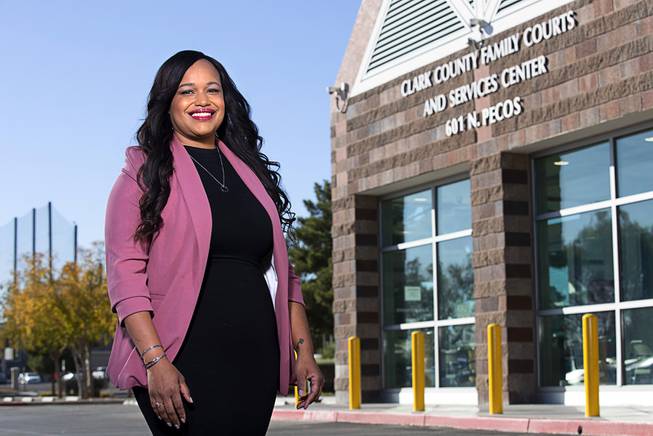 Dee Butler is part of the change.

A young, Black woman who came from modest beginnings earned her stripes in her community, then aspired to take her combination of practical, professional and personal experiences to a higher place — in this instance, an elected judgeship on the Clark County District Court’s Family Division.

Las Vegas needed something, somebody different in the family courts, which cover divorce, child custody, visitation and support, adoption and abuse and neglect, Butler said.

Voters agreed, giving her a comfortable margin of victory in the Department J race.

Butler, a 10-year veteran of the Clark County Public Defender’s Office who oversees a team of attorneys in the domestic violence unit, will be the first Black woman to sit on the local family court bench when she’s sworn in Jan. 4.

Her win this November was part of a raft of judicial elections and a strong showing for female jurists. Emerge Nevada, which recruits and mentors Democratic women statewide running for office at all levels of government, was especially active in getting women on the 2020 ticket. Twenty-seven of their 38 program alumnae on the ballot won this fall; 14 of 15 were judicial candidates. Seventeen were first-time candidates, and half were women of color, first-generation Americans or LGBT.

Emerge Nevada board member Cyndy Hernandez said diversity is a core value for the organization.

“We need people in office to represent the electorate,” she said. “Nevada’s so diverse across the state.”

Nevada built the first woman-majority state Legislature in the country in 2018 and maintained it this year. Hernandez said voters recognized what qualified female candidates offered.

“When women are in office, they support the bread and butter politics that voters are looking to, and I think this is just a year where those policies are in the forefront,” she said. “Voters recognize that. Voters recognize that women just lead differently, and they made their choice that we want to see more women in office.”

“We are so proud of our Emerge Nevada alumnae who were a dominant force on the ballot this year, and we are especially thrilled that so many of them were elected in historic wins,” added Danna Lovell, Emerge Nevada executive director. “Our alumnae ran for offices across the state, from Las Vegas to Reno to Fallon to Carson City to Sparks, fighting for a more equitable and just future for all Nevadans.”

Almost all the Emerge Nevada winners were in Clark County, although women who have been through the program picked up seats on the Reno City Council and Carson City Board of Supervisors. Candidates in typically conservative rural areas didn’t win their races, but changed the conversation of where and when Democratic women could run, Hernandez said.

Emerge teaches candidates how to be authentic and build confidence, and forms a tight sorority, Butler said.

She grew up poor in St. Louis as the only child of a single mother. Her mother was a social worker and encouraged positive, wholesome activities, leading Butler to Howard University. After earning a degree in psychology, she moved back to the midwest to work as an assistant to the University of Missouri president and his wife. This introduced her to lawyers and the idea that she could be one, too.

UNLV’s Boyd School of Law was one of about 10 law schools that she applied to, the first to offer admission, and the obvious choice. After moving here in 2005, she knew she had to stay in Las Vegas where she could live an active lifestyle, entertain visitors and enjoy agreeable year-round weather.

Her first job out of law school was at a small local firm that did insurance defense and family law. She transitioned to the public defender’s office juvenile division, working with youthful offenders who she learned didn’t have many attorneys who looked like them. She knew she’d grown up hearing some of the same things they did ­— you won’t amount to much being from a poor neighborhood. Try learning a trade or how to do hair.

In family court, which has natural crossover with her background in domestic violence and youth cases, many participants represent themselves. Although defendants are guaranteed a free lawyer in criminal proceedings, that’s not the case in family cases.

Family cases have less defined timeframes, and their effects can stay with clients for life. “Winners” are less clear.

Butler thought about waiting until her children — ages 9, 7 and 2 — were older to seek judgeship, but she decided, why wait. This is a year of leaving comfort zones.

She said she wants to help people resolve conflicts efficiently and peacefully under the law “while treating them with compassion.” She wants to be flexible and accessible.

She also knows first-hand, recently, how the court works. She shares her two elder children with her ex-husband, arrangements that were worked out in Clark County family court.

“I understand what it feels like to stand in that space,” hearing from a judge how often she can see her kids, she said. “It’s terrifying.”

For as diverse as Clark County’s population is, the bench should reflect that, Butler said.

She turns to something Kamala Harris — a fellow Alpha Kappa Alpha at Howard University — has said about breaking gender and racial barriers.

“It’s 2020,” she said. “While I’m excited, it’s kind of like our vice president-elect said: I’m really focused on not being the last.”